The Microsoft Research-Inria Joint Center, Inria JC, is a collaborative research partnership between Microsoft Research and Inria, the French Public Research Institute in Computer Science. Since its creation in 2005, the Inria JC has been home to over 25 projects co-led by researchers from Inria and MSR. There are currently eleven active projects, addressing a wide range of cutting-edge research challenges.

Security is an area of particular focus, with projects on cryptography for blockchains, certification of distributed algorithms’ correctness, and design of cryptographic protocols for the Internet with certified security properties.

Artificial Intelligence is another main focus of the Inria JC with projects on machine learning and computer vision (specifically for Mixed Reality devices such as HoloLens) and alternative paradigms to reinforcement learning for continuously evolving and interacting agents.  In Computer Vision, the Inria JC partners closely with the Mixed Reality & AI Zurich Lab. 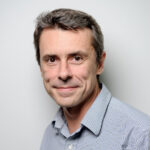 “Collaboration between computer science researchers from academia and industry has never made more sense than today, given the exciting challenges and opportunities offered by our field. The MSR-Inria JC empowers such collaborations between fellow researchers at Inria and Microsoft Research on topics from artificial intelligence to security and quantum computing.”