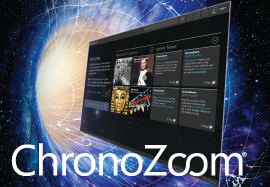 Visualizing the history of everything

Note: This project is retired and no longer supported, but is still available for use.

Take an epic voyage through time, infinitely scalable from the Big Bang to today, exploring history through this master timeline of the cosmos, Earth, life, and human experience

This project was funded and supported by Microsoft Research in collaboration with University California at Berkeley and Moscow State University.