Microsoft Translator Hub empowers businesses and communities to build, train, and deploy customized automatic language translation systems—bringing better and specialized translation quality to established languages, and first-time automatic translation capabilities to the many languages that are not yet supported by major translation providers.

Microsoft Translator Hub is free and easy to use—you need not be a linguist or machine translation expert. Get started with your language translation.

Automatic language translation has been dominated by a few major providers, resulting in coverage that is limited to fewer than 100 languages—even though there are more than 7,000 languages in the world. Speakers of these other languages must adopt non-indigenous languages to be able to access the global knowledge base—or they risk being excluded from the vast wealth of information it offers.

Microsoft Translator Hub empowers users to build translation models that help preserve indigenous languages. It also allows the creation of translations within a given language that are scoped to the specific interests of a community or organization—ranging from transportation and agriculture to healthcare and technology.

Translation between any two languages via a web-accessible system in a private workspace.

Crowdsourcing—designated members of the public can participate to help improve the translation system.

Domain-specific models—users can build highly customized systems that are scoped to specific domains of interest.

Advances in machine-translator research—Microsoft Translator development contributes to the body of research on domain-specific translation models as well as research on improved machine translation between two languages. 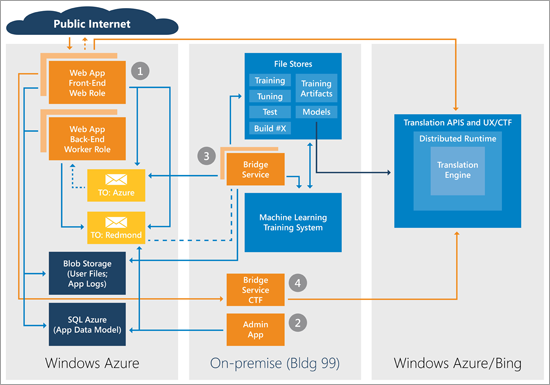 The process for translating from one language to another can be broken down into four basic steps:

By using the parallel documents, Microsoft Translator Hub is able to “learn”:

Your reviewers make recommendations on how to further refine the translation, based on the results of the training output. This process can be repeated as necessary until an acceptable level of quality has been achieved, and the translation system is ready for deployment.

Once deployed, these services are web accessible by using the standard Microsoft Translator APIs—HTTP, AJAX, and SOAP interfaces, as well as a webpage widget.

Within each of these steps, there are several activities that need to be completed, and once you’ve signed in to Microsoft Translator Hub, more detailed instructions are provided, as well as tutorial videos, to help you along.

“Our goal is to further scientific research, enable equality in education, and improve human-technology interactions. What can be more natural than learning and experiencing technology in your own language?”