Pex automatically generates test suites with high code coverage using automated white box analysis. Pex is a Visual Studio add-in for testing .NET Framework applications. Moles supports unit testing by providing isolation by way of detours and stubs. The Moles framework is provided with Pex, or can be installed by itself as a Microsoft Visual Studio add-in.

A Roadmap in Retrospective

IntelliTest in Visual Studio 2015 is the next generation of Pex.

The Fakes Framework in Visual Studio 2012 and 2013 and 2015 is the next generation of Moles & Stubs. Fakes is different from Moles, however, so moving from Moles to Fakes will require some modifications to your code. Moles will not be developed further, so we recommend to migrate to Fakes.

Code Digger for Visual Studio 2012 and 2013 is a lightweight version of Pex that allows you to explore public .NET methods in Portable Libraries directly from the code editor.

Thanks for your support, The Pex and Moles Team.

Code Digger for Visual Studio 2012 and 2013 is a lightweight version of Pex that allows you to explore public .NET methods in Portable Class Libraries directly from the code editor. Under the hood, Code Digger uses the Pex engine.

Try it out on the Web

Try it Out on the Web: www.pexforfun.com

Pex for fun on the web is a radically simplified version of the fully featured Pex Power Tool for Visual Studio. You do not need to install anything; all the work happens in the cloud. You can write code in C#, Visual Basic, or F#. Go to www.pexforfun.com, which comes with a set of code puzzles. Then click on the “Ask Pex!” button to get the answer yourself. Share your puzzles with your friends. Click Learn to start tutorials. 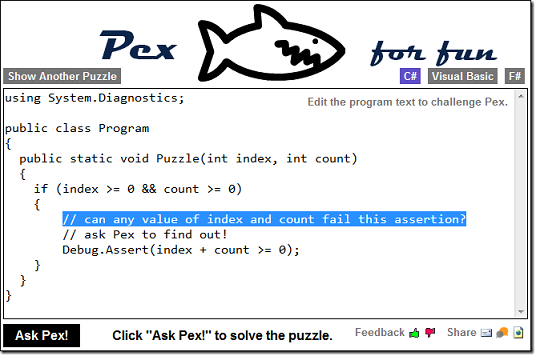