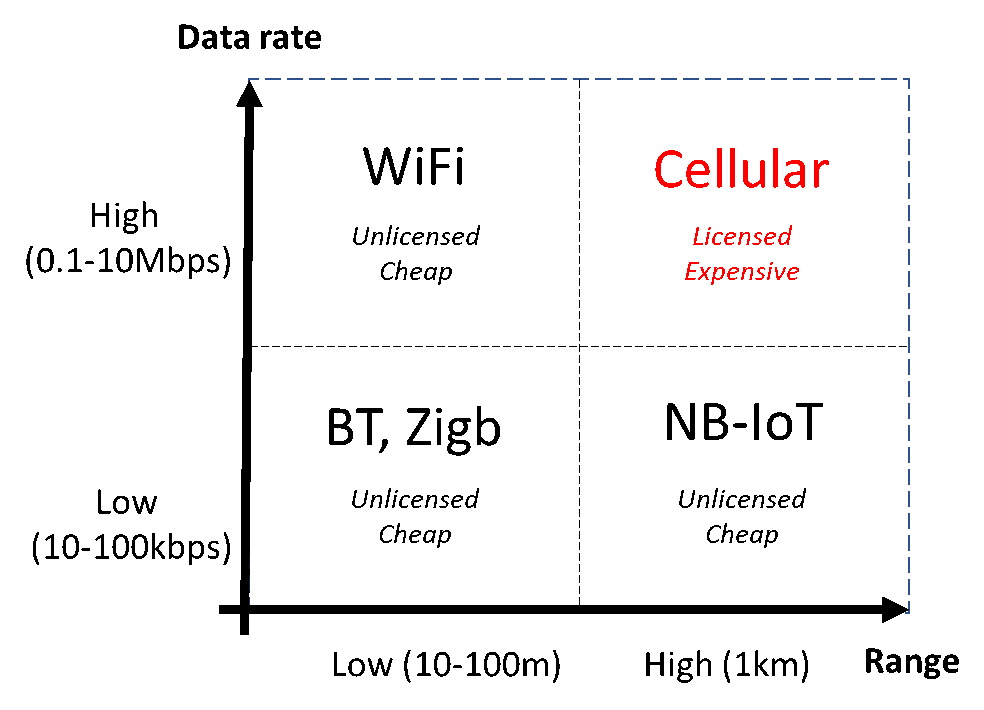 Unlicensed wireless is ubiquitous, by some accounts carrying over 80% of overall mobile data traffic. However, today’s unlicensed wireless technologies are effective only over short distances. The only exceptions are narrow-band IoT solutions (e.g. LoRA, Sigfox) which have an extended range but also a very low throughput. Consequently, high-bandwidth (1Mbps or more) and long range (several hundred meters) connectivity today can only be achieved through a licensed cellular network.

Recent efforts in standardizing TV white space (TVWS) frequencies promise to change that. TVWS is a wireless spectrum in UHF television bands, vacated after the digital TV switchover. These TV bands are now offered for license-exempt use in several countries (e.g. US, UK). UHF spectrum has very good propagation characteristics and the bandwidth of one or more TV channels is enough to provide speeds of tens of Mbps.

The ongoing standardization process in TVWS is based on Wi-Fi, the most successful unlicensed radio technology. Recent 802.11af standard proposes several modifications to Wi-Fi radio that enable it to operate within a TV channel while maintaining the rest of the Wi-Fi stack. However, one of the issues with Wi-Fi is that it is not designed specifically for coverage and might have issues in achieving very long range.

The goal of our project is to explore the use of cellular radio technology in TVWS. Cellular technology, such as LTE, has been designed to provide coverage hence its radio design is optimized for this use case. It is also frequency agnostic and supports various frequency bands, including some of the TVWS bands. However, cellular has been designed for planned operator deployments. They don’t support unplanned interference management, interoperability with spectrum databases, etc.

During this project we have demonstrated the feasibility of this approach by building and deploying a sizeable cellular network testbed in the city of Cambridge running on TV white space frequencies. Below are some of our main learnings from this project:

Frequency flexibility: LTE supports over 70 different bands in different parts of the spectrum. Most of these bands are optimized for specific spectrum licenses which limits spectrum agility. However, we have found that some of the bands, most notably the 600 MHz and 700 MHz bands (B71, B13, B17, B28, B44), overlap with the TVWS spectrum and compatible hardware can be used as TVWS device.

TVWS certification: We have studied the existing LTE devices to understand whether they conform the ETSI TVWS hardware specification. We have commissioned a study with a test house that has confirmed that an existing small cell satisfies RF requirements for ETSI Category 3 TVWS device and an existing terminals (UE) satisfies RF requirements for ETSI Category 4 TVWS device. The only test that we have not been able to set-up was the transmitter intermodulation test, but we believe that a modern LTE hardware will meet these requirements as well. We also note that we have been able to certify LTE UEs only with generic operational parameters (certification with specific operational parameters may require more work).

Affordability: Since some of the LTE devices can operate on TVWS frequencies with no modifications, they can be sourced for less than $100. We have also found that small cell price is similar to the price of today’s TVWS hardware.

Database compatibility: To operate in TVWS spectrum, devices need to get a spectrum grant from a certified TVWS database. As a part of the project we have built an open-source TVWS database client for an LTE small cell (code can be found here). The client has been tested on IP Access E40 small cell, but its architecture is compatible with general small cell architecture. We have certified with a test house most of the functionality of our client in accordance to ETSI TVWS database rules (ETSI EN 301 598, RFC 7545).

Cloud deployment: One of the complexities of a cellular network deployment is its core. We have adapted a simplified cellular core to operate on the Azure public cloud and modified a small cell to reliably interface with it. To do this we modify the S1AP connection to work over TCP, and added a client on a small cell to improve reliability (for more details see the technical report). We have released the source code for this architecture under a special license that allows its use if it is deployed on the Azure cloud (the code and the license can be found here).

Coexistence: LTE does not have a default provision for coexistence in unplanned deployment. Our initial research efforts (described here) attempted to solve that, but we were unable to implement them fully due to lack of access to base station firmware. We believe that further LTE standards, such as MuLTEFire, may address these concerns adequately. 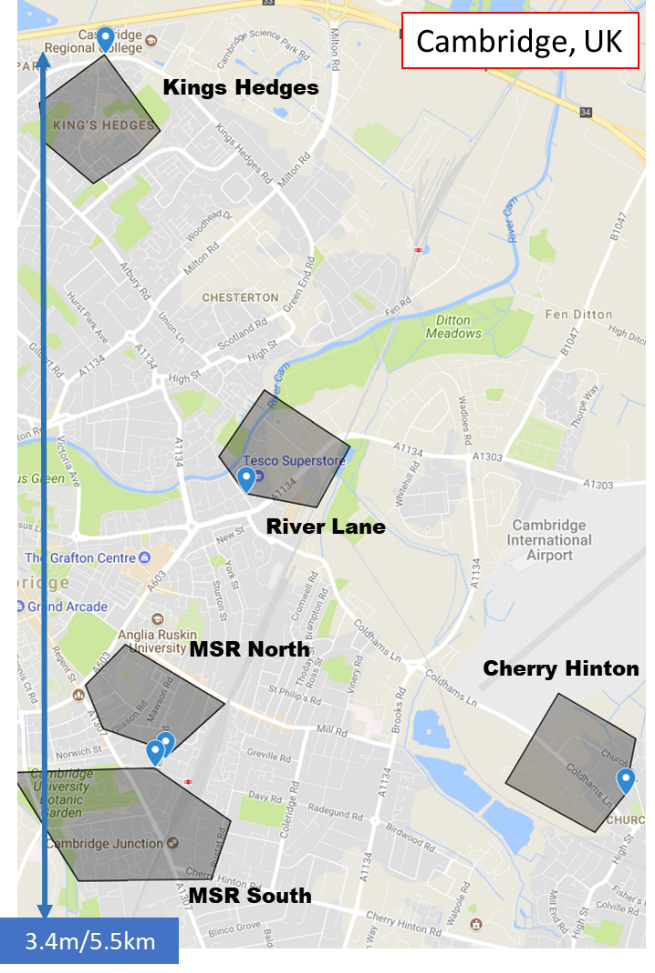 As a part of the project we have deployed a testbed in the city of Cambridge, UK. The testbed has 5 sites. We have worked with a local housing association to identify residents who do not have home broadband. This includes families with young children, senior citizens and young people in supported housing. We currently provide connectivity to more than 30 residents. We have been pleased to learn that some of them found jobs using the Internet connectivity, reconnected to friends and relatives across the world, and started using online services (from shopping to interacting with the housing association), which we often take for granted. We present some of their stories below.

Each customer has a MiFi device placed inside her or his apartment. The device doesn’t require any special mounting or special antennas. They connect their end devices (laptops, tablets or phones) to it. In our deployment, the maximum indoor range we observe is around 700m. In our outdoor tests we were able to reach connectivity at about 1.5km.

Our network serves about 30 users with 20-40GB of traffic each day. The maximum link throughput we observed was in excess of 20 Mbps (with 2×2 MIMO on 5MHz duplex link) and all clients get at least 4 Mbps.

Below are some of the stories how the connectivity we provided helped Cambridge residents: 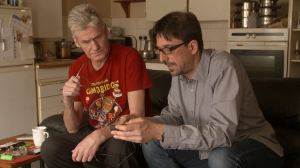 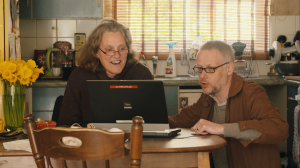 The Internet has reached almost every aspect of the modern society. Yet many people, even in the developed world, are still not connected to it. More than 34 million Americans have no access to the Internet. Around 9 million people do not have access to fixed broadband in the UK, which is around 15% of the UK population. One of the most common reasons for not having the Internet access is the limited coverage and connectivity in rural areas. A recent Microsoft initiative in the US (Connecting Rural America to New Opportunities) is focusing on these issues.

Also, many of the unconnected people live in developed, urban areas. They may have a low credit rating, might not be not digitally literate, or cannot afford or are not aware of the benefits of having Internet connectivity. Around one-third of government supported social housing residents in the UK do not have a fixed broadband connection. They often use expensive and limited pay-as-you-go mobile subscriptions and are afraid to use them too much because of the extra charges they may incur. For the same reason, very few of them use the Internet on a larger screen (a table or a laptop), which prevents them to taking part in many useful online activities, such as online training and preparing job applications.

Equally, long-range, high-bandwidth connectivity may be an opportunity for novel IoT scenarios. Some high-bandwidth scenarios, such as smart cities, video analytics or robot navigation, cannot be supported by narrow-band IoT technologies (because of excessive bandwidth), Wi-Fi (because of limited range) or conventional cellular network (because of high cost).

In our setup we used the following hardware and software:

We would like to acknowledge several individuals and institutions: James Lewis and CHS Group, Cambridge City Council, Nominet, Core Network Dynamics, IP Access, Cambridge Future Business Centre. This project wouldn’t have been possible without their help.