In February, we announced DeepSpeed, an open-source deep learning training optimization library, and ZeRO (Zero Redundancy Optimizer), a novel memory optimization technology in the library, which vastly advances large model training by improving scale, speed, cost, and usability. DeepSpeed has enabled researchers to create Turing Natural Language Generation (Turing-NLG), the largest publicly known language model at 17 billion parameters. From there, we have been continuing to innovate at a fast rate, pushing the boundaries of speed and scale for deep learning training. Today, we are happy to share our new findings and results as we introduce the improved ZeRO-2 and further developments with DeepSpeed:

All of these exciting new optimizations are now available in our open-source library, DeepSpeed. This work is an important part of Microsoft’s new AI at Scale initiative to enable next-generation AI capabilities at scale. This accompanying AI blog post sheds light on how DeepSpeed is changing the game in big ways for large-scale AI since its release just a few months ago.

ZeRO-2: Training models with 100 billion parameters up to 10x faster

The Zero Redundancy Optimizer (abbreviated ZeRO) is a novel memory optimization technology for large-scale distributed deep learning. Unlike existing technologies like data parallelism (that is efficient but can only support a limited model size) or model parallelism (that can support larger model sizes but requires significant code refactoring while adding communication overhead that limits efficiency), ZeRO allows fitting larger models in memory without requiring code refactoring while remaining very efficient. ZeRO does so by eliminating the memory redundancy that is inherent in data parallelism while limiting the communication overhead to a minimum.

In our February release of DeepSpeed, we included optimizations to reduce optimizer state memory (ZeRO-1). Today, we release ZeRO-2, which extends ZeRO-1 by including optimization to reduce gradient memory, while also adding optimizations that target activation memory and fragmented memory. Compared with ZeRO-1, ZeRO-2 doubles the model size that can be trained with DeepSpeed while significantly improving the training efficiency. With ZeRO-2, a 100-billion-parameter model can be trained 10x faster than with the state-of-art technology based on model parallelism alone.

ZeRO-2 optimizes the full spectrum of memory consumption during deep learning training, which includes model state (such as optimizer states and gradients), activation memory, and fragmented memory. Figure 1 shows the key techniques in ZeRO-2, and the details are below.

Model state memory: ZeRO has three accumulative stages to optimize model states. These states are partitioning optimizer states (Pos), gradients (Pos+g), and parameters (Pos+g+p) respectively. The ZeRO-1 implementation we shared in February supports the first stage, partitioning optimizer states (Pos), which saves up to 4x of memory when compared with using classic data parallelism that replicates everything. ZeRO-2 adds the support for the second stage, partitioning gradients (Pos+g), which reduces per-device memory consumption by another 2x, on top of the first stage’s 4x reduction. Compared with default data parallelism, ZeRO-2 obtains up to 8x memory saving on model states, with the same communication volume.

Activation memory: After optimizing model states, we notice that activations (stored from forward pass in order to perform backward pass) can be a secondary memory bottleneck. Activation checkpointing helps, but it is not sufficient for very large models. ZeRO-2 introduces new techniques to remove activation replication in existing model parallelism approaches through activation partitioning. It also offloads activation memory to the host CPUs when appropriate.

ZeRO-2 excels in four aspects (as visualized in Figure 2), supporting an order-of-magnitude bigger models, up to 10x faster, with superlinear scalability, and improved usability to democratize large model training. These four aspects are detailed below. 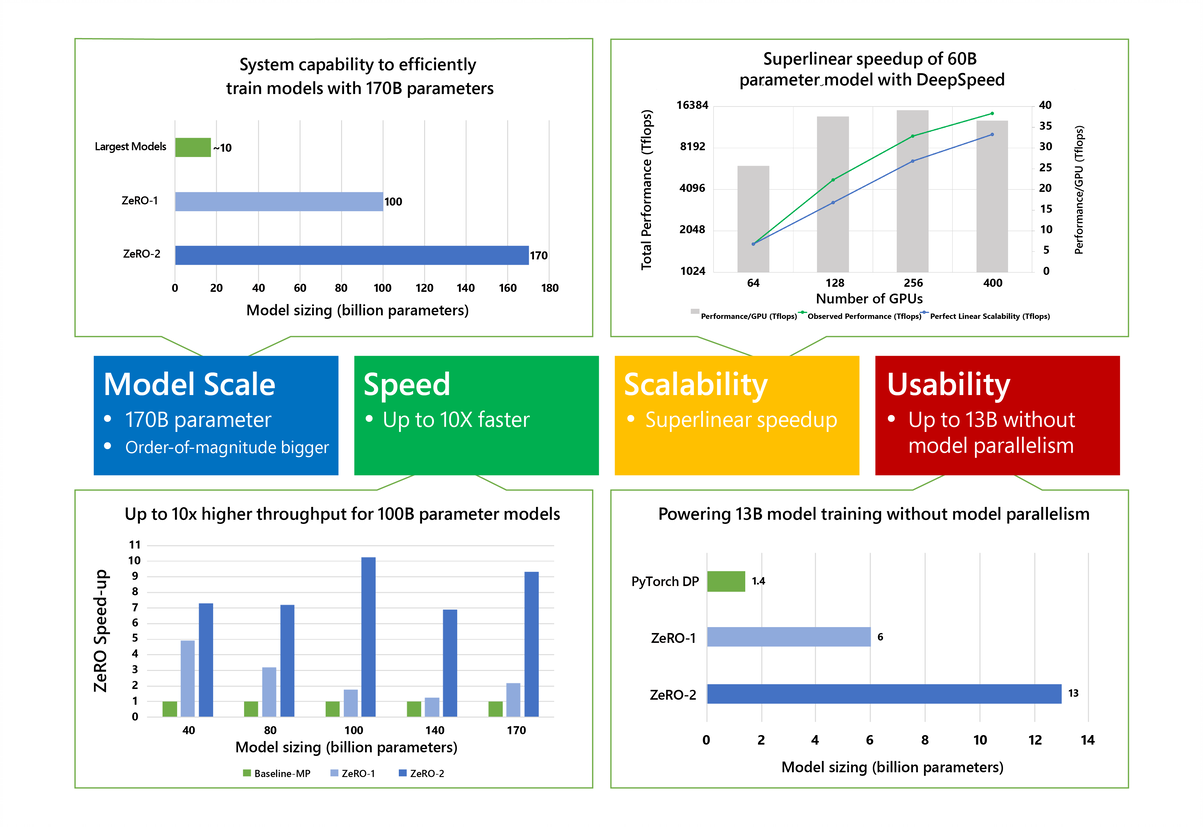 Figure 2: ZeRO-2 scales to 170 billion parameters, has up to 10x higher throughput, obtains superlinear speedup, and improves usability by avoiding the need for code refactoring for models up to 13 billion parameters.

Model scale: State-of-the-art large models (trained without using ZeRO) such as OpenAI GPT-2, NVIDIA Megatron-LM, and Google T5 have sizes of 1.5B, 8.3B, and 11B parameters respectively. ZeRO-2 provides system capability to efficiently run models of 170 billion parameters, an order-of-magnitude bigger than these largest models (Figure 2, top left). The tests were conducted using 400 NVIDIA V100 GPUs; with more devices (such as 1,000 GPUs), ZeRO-2 allows us to scale toward 200 billion parameters.

Scalability: We observe superlinear speedup (Figure 2, top right), where the performance more than doubles when the number of NVIDIA GPUs are doubled. ZeRO-2 reduces the memory footprint of the model states as we increase the data parallelism degree, allowing us to fit larger batch sizes per GPU and resulting in better performance.

For more details about ZeRO-2, please see the DeepSpeed GitHub repository and the updated ZeRO paper.

Achieving the fastest and most efficient BERT training with DeepSpeed

While ZeRO primarily benefits large models during distributed training across a cluster of devices, we also introduce new technology, highly optimized transformer kernels and asynchronous I/O, that boosts compute and I/O speed of training on each individual GPU. This line of optimizations not only builds a solid basis when scaling out large models, but also squeezes out the last bit of already optimized performance while training moderately sized models like BERT.

We achieve the fastest BERT training record: 44 minutes on 1,024 NVIDIA V100 GPUs. Furthermore, the improved training time is not at the cost of excessive hardware resources but comes from software-boosted efficiency: We improve training throughput by over 30% when compared with the best results on the same number and generation of GPUs. We observe 64 teraflops of throughput on a single V100 GPU, achieving over 50% of hardware peak.

Let’s start by first looking at single GPU performance. Figure 3 shows the single V100 GPU throughput achieved with DeepSpeed for training BERT-Large, compared with two well-known implementations, NVIDIA BERT and HuggingFace BERT. DeepSpeed reaches throughput as high as 64 and 53 teraflops (corresponding to 272 and 52 samples/second) for sequence lengths of 128 and 512, respectively, exhibiting up to 28% throughput improvements over NVIDIA BERT and up to 62% over HuggingFace BERT. We also support up to 1.8x larger batch size without running out of memory.

Figure 3: Performance evaluation of BERT-Large on a single V100 GPU, comparing DeepSpeed with NVIDIA and HuggingFace versions of BERT in mixed-sequence length training and with gradient accumulation step of 10. The labeled points show the highest throughput of each implementation in teraflops (Tflops). DeepSpeed boosts throughput and allows for higher batch sizes without running out of memory.

Even higher throughput could be obtained by combining our software optimizations with new hardware such as the NVIDIA A100 Tensor Core GPU, which has 2.5x hardware peak performance of the V100 GPU. Assuming the A100 GPU allows us to obtain the same percentage of hardware peak performance (50%) as we obtained on V100 GPUs, that could potentially reduce BERT training time further to less than 25 minutes on a cluster of 1,024 A100 GPUs.

The system performance improvements of DeepSpeed on BERT pretraining primarily come from our highly optimized transformer kernels, where we employ two lines of optimizations.

First, we observe that transformer-based networks trigger many invocations of NVIDIA CUDA kernels operating in a producer-consumer fashion, which creates excess read/write requests to memory. This pattern is a perfect match for kernel fusion, and we developed fused transformer-kernels to reduce data movement. Furthermore, in the fused kernel, we distribute data processing among NVIDIA GPU cores in a way to reduce the synchronization and data communication between them. DeepSpeed leverages these optimized fused transformer-kernels to maximize data reuse and improve computation efficiency on GPUs.

Second, we leverage invertible operators to save memory and support large batch size. Invertible operators are those whose backward pass is independent of the inputs and can be formulated based only on the outputs. We have seen that several operators of transformer have such behavior, including Softmax and Layer Norm. By leveraging their invertible property, we drop the inputs to these layers to reduce the footprint of activation memory. An example of the original and invertible Softmax computation is shown in Figure 4, where the invertible version reduces the activation memory of the operator by half. Reduced activation memory allows us to fit larger batch sizes, which often leads to higher efficiency.

In addition to optimized kernels, we employ asynchronous I/O to overlap computation with communication, leverage pre-layer norm that allows higher learning rate and faster convergence, and reduce redundant calculation at the output layer.

Altogether, these techniques optimize BERT training time and efficiency. Furthermore, most of these optimizations are not BERT specific. Instead they are generic optimization strategies applicable across a wide range of workloads. For example, we package the highly optimized kernels as custom transformer operators, which are easily reusable in other transformer-based models.