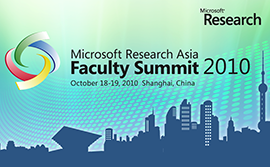 The Microsoft Research Asia Faculty Summit 2010 was held in Shanghai, China, October 18–19, 2010. The central theme of this year’s faculty summit was “Technological Trends and Future Talent.” The summit provided an opportunity for leading faculty from the Asia Pacific region to share views about how technological advances and computing trends can present new opportunities for research and development in computer science and other related disciplines. The Computing in the 21st Century Conference followed the summit on October 20.

The faculty summit will highlight current technological trends, such as cloud-client computing, natural user interaction, and the challenges of large data and its visualization. The demand for training in these fields presents challenges as well as opportunities for developing new talent for the future.

Presentations and discussions will focus on how technology is helping solve issues that society is facing and how to train the future talent to meet societal needs. Participants will have the opportunity to interact directly with visionaries working in these important technical areas and to communicate directly with researchers who are involved in some of the most exciting technologies.

Below are a few of the many topics to be discussed during the Microsoft Research Asia Faculty Summit 2010: