Drawbridge is a research prototype of a new form of virtualization for application sandboxing. Drawbridge combines two core technologies: First, a picoprocess, which is a process-based isolation container with a minimal kernel API surface. Second, a library OS, which is a version of Windows enlightened to run efficiently within a picoprocess. 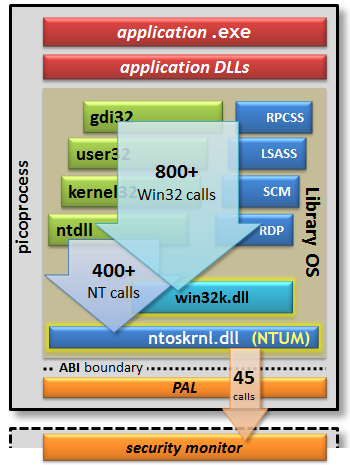 A Windows Library OS in context

Despite these advantages, VMs have large resource overheads in terms of disk footprint, memory, CPU, and administrative costs.

Drawbridge combines two ideas from the literature, the picoprocess and the library OS, to provide a new form of computing, which retains the benefits of secure isolation, persistent compatibility, and execution continuity, but with drastically lower resource overheads. 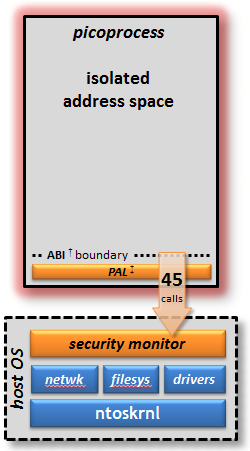 The Drawbridge picoprocess is a lightweight, secure isolation container. It is built from an OS process address space, but with all traditional OS services removed. The application binary interface (ABI) between code running in the picoprocess and the OS follows the design patterns of hardware VMs; it consists of a closed set of 45 downcalls with fixed semantics that provide a stateless interface. All ABI calls are serviced by the security monitor, which plays a role similar to the hypervisor or VM monitor in traditional hardware VM designs.

A better sandbox container is a necessary, but not sufficient condition for greater scalability of virtualized applications. The key second ingredient is the library OS. A library OS is an operating system refactored to run as a set of libraries within the context of an application.

Upon the base services of NTUM and the user-mode Win32 subsystem, Drawbridge can run many of the DLLs and services from the hardware-based versions of Windows. As a result, the Drawbridge prototype can run large classes of Windows desktop and server applications with no modifications to the applications.