Microsoft SEAL—powered by open-source homomorphic encryption technology—provides a set of encryption libraries that allow computations to be performed directly on encrypted data. This enables software engineers to build end-to-end encrypted data storage and computation services where the customer never needs to share their key with the service.

Homomorphic Encryption refers to a new type of encryption technology that allows computation to be directly on encrypted data, without requiring any decryption in the process. The first homomorphic encryption scheme was invented in 2009 and several improved schemes were created over the following years. There were a few notable and publicly available implementations, but their use required extensive understanding of the complicated mathematics underlying homomorphic encryption and were not easily usable by normal software developers.

Our goal was different: making homomorphic encryption easy to use and available for everyone. Today, Microsoft SEAL reaches this goal by providing a simple and convenient API with state-of-the-art performance. Microsoft SEAL comes with several detailed and thoroughly commented examples, demonstrating how the library can be used correctly and securely, and explaining any necessary background material.

In traditional cloud storage and computation solution customers need to trust the service provider to store and manage their data appropriately, e.g., not to share it with third parties without the customer’s consent. Microsoft SEAL replaces this trust with state-of-the-art cryptography, allowing cloud services to provide both encrypted storage and computation capabilities, while still guaranteeing that their customer’s data will never be exposed to anyone in unencrypted form. 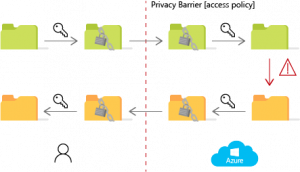 In traditional cloud storage and computation solutions the cloud need to have unencrypted access to customer data to compute on it, necessarily exposing the data to the cloud operators. Data privacy relies on access control policies implemented by the cloud and trusted by the customer. 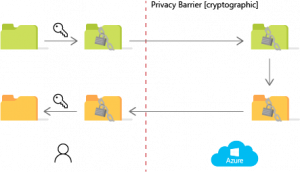 With Microsoft SEAL, the cloud operators will never have unencrypted access to the data they are storing and computing on. This is possible through homomorphic encryption technology, that allows computations to be performed directly on encrypted data. Data privacy relies on state-of-the-art cryptography (mathematics) and all information release will be controlled by the customer.

In addition to the license change, this release brings many internal and a few API updates.

Due to a minor mistake SEAL 3.0 did not compile with OS X toolchains. This problem has now been fixed.

SEAL 3.0 is finally ready! Among other things, this major release adds support for the `FullRNS’ variant of the Cheon-Kim-Kim-Song (CKKS) approximate arithmetic scheme.

Let us know if you have any comments! For technical questions that can be of general interest, please ask on StackOverflow using the tag [seal]. For other communication, contact us at sealcrypto@microsoft.com.

P.S.: A big thank you to everyone who submitted bug reports for SEAL 2.3.1 and earlier versions.

A shiny new version of SEAL is now available! Here are the main changes:

Feel free to email sealcrypto@microsoft.com if you find any bugs, or if you have feature requests or other suggestions.

A new update v2.3.0-4 fixing several major bugs and issues has been released. Important changes include:

As some of you may have noticed, we’ve been pushing a lot of small (and big) bug fixes and other updates since the initial release of v2.3.0. We just released SEAL v2.3.0-3 which—in addition to the bug fixes—brings substantial improvements to memory locality and subsequently has a major impact on performance with larger parameters.

SEAL v2.3.0-2 can now be downloaded directly from https://www.microsoft.com/en-us/download/details.aspx?id=56202.

A new version of SEAL is available! This is the biggest update since the first release, and contains a huge number of improvements, including:

A new SEAL manual will be available shortly.

We highly recommend all users (especially those familiar with older versions of SEAL) to go carefully over the examples in SEALExamples/main.cpp. There are several subtle but critical differences to SEAL v2.2, which are necessary to know to achieve the best performance.

SEAL is now available at http://sealcrypto.visualstudio.com. To get access, send us an email at sealcrypto@microsoft.com, include an email address associated to your Microsoft Live Account, and tell us briefly what you are planning on using SEAL for. SEAL v2.3 will be available only through the new repository.

SEAL v2.2 has been released. It includes the changes from the experimental branch, and many other improvements. We have big plans for major improvements to be implemented this summer, so stay tuned!

A new experimental branch has been created. This branch will get much more frequent updates than the master branch, but these updates may not have been tested as thoroughly as the code in the master branch, may introduce frequent API changes, and may contain incomplete functionality. This first experimental commit contains some significant performance improvements over SEAL v2.1.

Again a new version of SEAL has been released. This is a fairly large update, which focuses mostly on performance, but also introduces some small API changes.

To accompany the release and to explain the changes in SEAL v2.1, we have released a new version of the documentation, available here.