Home heating uses more energy than any other residential energy expenditure, making increasing the efficiency of home heating an important goal for saving money and protecting the environment. We have built a home-heating system, PreHeat, that automatically programs your thermostat based on when you are home. PreHeat’s goal is to reduce the amount of time a household’s thermostat needs to be on without compromising the comfort of household members.

PreHeat builds a predictive model of when domestic spaces are occupied and then heats them only when necessary, saving the household money and reducing the amount of energy used while maintaining or increasing the occupants’ comfort levels without requiring the user to manually program their thermostat. Surveys have found that fewer than 50% of U.S. households have programmable thermostats, and even worse, the U.S. Environmental Protection Agency estimates that 30% or more of U.S. households with programmable thermostats are not using their thermostat’s programming feature. PreHeat eliminates the need for manual programming. 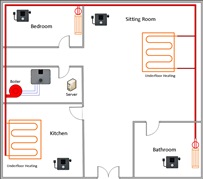 We have been running PreHeat in 5 houses, 3 in the U.S. and 2 in the U.K, since January 2011. In the UK homes, we are learning the schedule for each individual room separately, allowing for further energy savings since different rooms can automatically learn and follow different schedules (e.g. nobody goes into the study in the mornings). Our system uses active RFID and passive IR-based occupancy sensors, temperature sensors, heating system controllers (including for forced air systems (U.S.), water-filled radiators (U.K.), and underfloor heating (U.K.)), and PC-based control software using machine learning to predict schedules based on current and past occupancy.

During our deployment we are comparing occupant’s comfort and cost in three heating conditions a) PreHeat, b) Always-on: leaving the thermostat always-on at a comfortable temperature, and c) Program: using a heating program specified by the household members. While our study is ongoing, preliminary results in our five houesholds for prediction accuracy, comfort and cost of PreHeat compared to the other two conditions are encouraging.

PreHeat is a Microsoft Research project, a collaboration between the Sensors and Devices group (Cambridge), the VIBE group (Redmond) and the ASI group (Redmond). Other contributors include Mike Hazas, Steve Hodges, Ashish Kapoor, Asta Roseway, and Nic Villar.