Games and mixed reality must render a believable soundscape for the listener that situates characters and sounds within rich 3D worlds. Project Triton aids this task by physically modeling how sound propagates within a scene given its shape and materials. In doing so, it automatically models immersive sound propagation effects like sound occlusion and reverberation. Project Triton is unique in accurately modeling the true wave physics of sound, including diffraction, while still being fast enough to scale from desktop to mobile devices. Incubated over a decade of focused research, it is battle-tested technology, shipping in major game titles like Gears of War, Sea of Thieves, and Borderlands 3.

Sound is weakened when it diffracts around obstructions​.

Sound heard “through the wall” (red) from source direction is incorrect​. Doors redirect sounds, which is more believable​.

We perceive many acoustic effects in everyday life that result from the wave nature of sound propagation. They keep us aware and oriented in our surroundings, varying smoothly as we and sounds around us move through the world. Games and mixed reality thus usually need to reproduce them for a natural soundscape. Project Triton models many such important effects, illustrated above. For instance, obstruction and “portaling” together create a believable impression of sounds flowing around doorways. It is common for sound designers to have to do tedious manual markup to obtain such results. Project Triton removes this tedium, driving the effects robustly from scene geometry and empowering the designer with new tools to shape physics for storytelling goals. For example, one can reduce physical reverberance on game dialogue to make it cinematic, while heightening the reverberation on footsteps to make a cave feel spookier. All at runtime while fitting within practical CPU and RAM budgets.

Project Triton models the actual wave physics of sound propagation through complex 3D spaces. Audible sounds have wavelengths from centimeters to meters so that wave effects must be modeled to avoid unnatural results. An example is the “lamppost problem” – a thin lamppost blocking the ray from source to listener can occlude as much as a concrete wall. We never hear that in reality because sound waves wrap around objects, as seen in the animation above. This is diffraction. It is central to how sound moves around corners and through doorways, scatters, and fills up various rooms with reverberation. Wave simulation is very expensive, so we precompute on static visual 3D geometry on a compute cluster in a “baking” step. The overall pipeline is quite analogous to light baking, in that it moves expensive global propagation computation to a baking step – with the difference that moving sources are supported. This data is passed through a proprietary parametric compressor that drastically reduces data size and enables fast lookup and signal processing at runtime, enabling Triton to run even on mobile devices such as the Oculus Go.

The Coalition Studio (Gears of War) 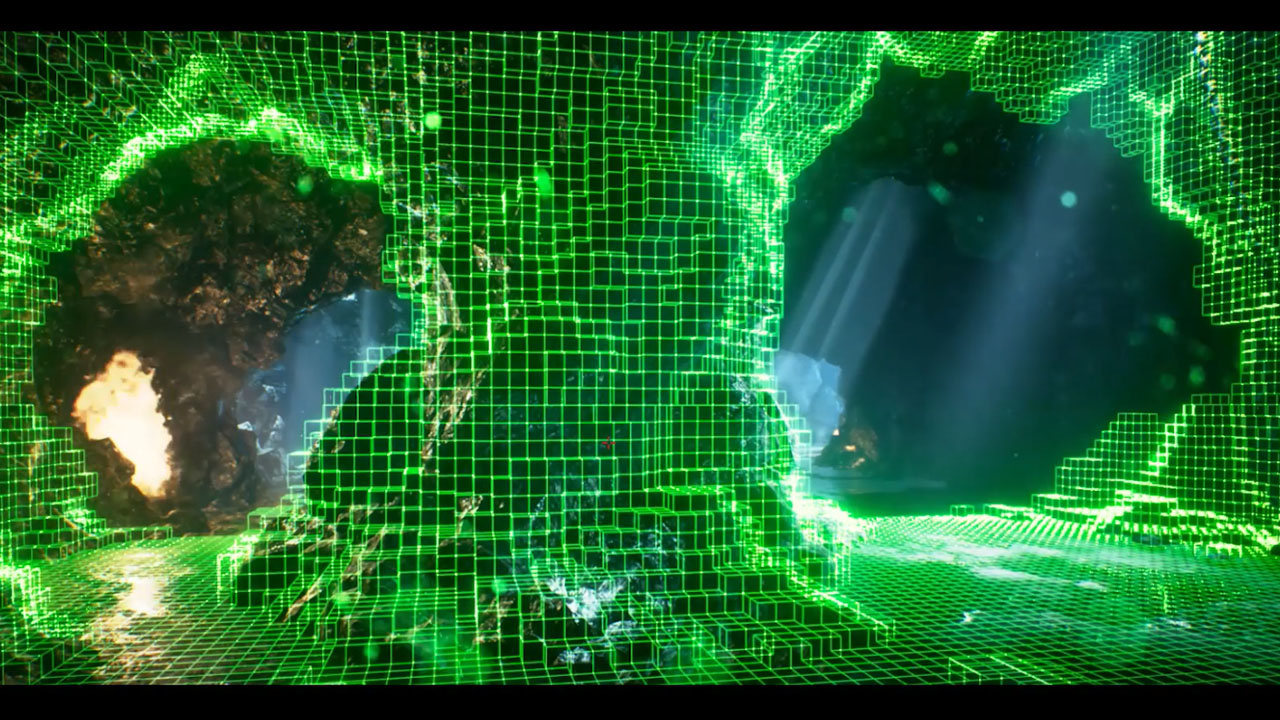 Project Acoustics is now available for all game developers and sound designers to use. It employs the Triton technology developed in Microsoft Research for accurate sound propagation using wave physics.…
See more > 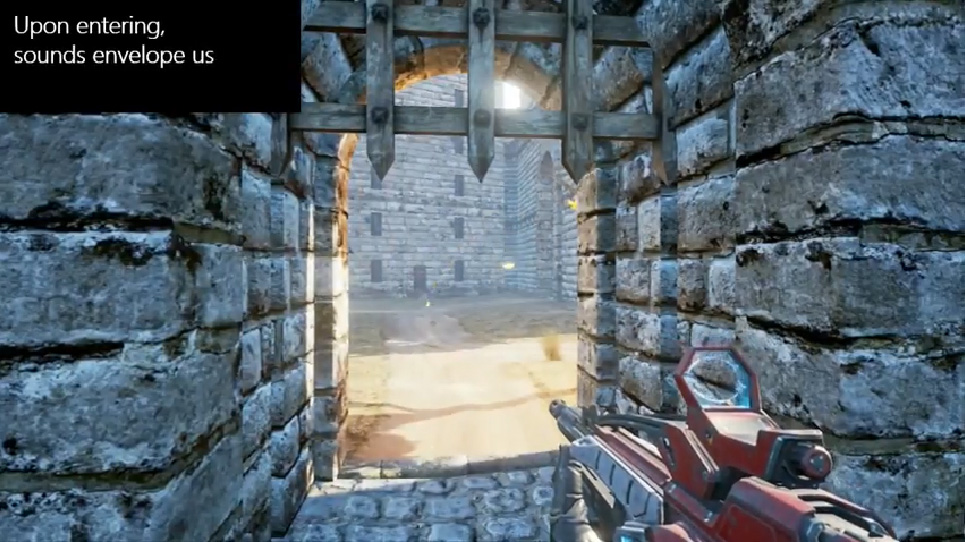 In this 2017 GDC talk, Microsoft’s Nikunj Raghuvanshi and John Tennant discuss both the technical and design aspects of Project Titan, a new audio system that robustly models complex wave phenomena such as diffraction…
See more > 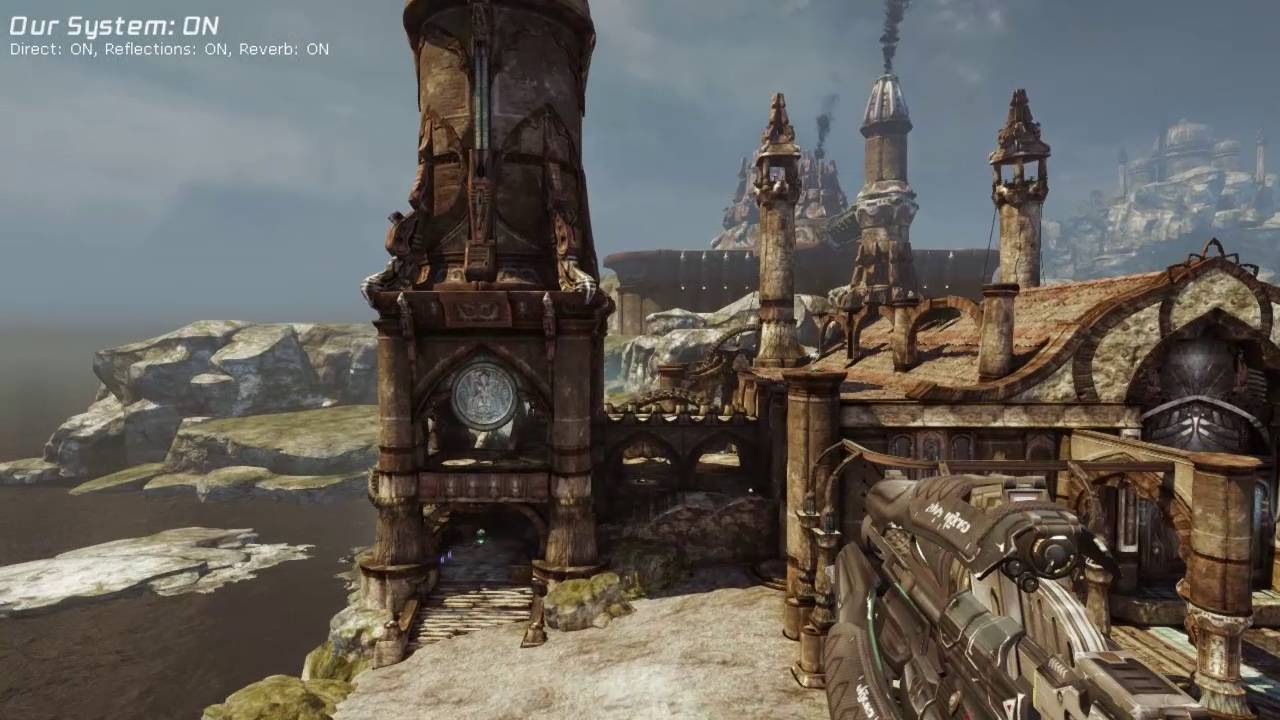 The acoustic wave field in a complex scene is a chaotic 7D function of time and the positions of source and listener, making it difficult to compress and interpolate. This hampers precomputed approaches which tabulate impulse…
See more > 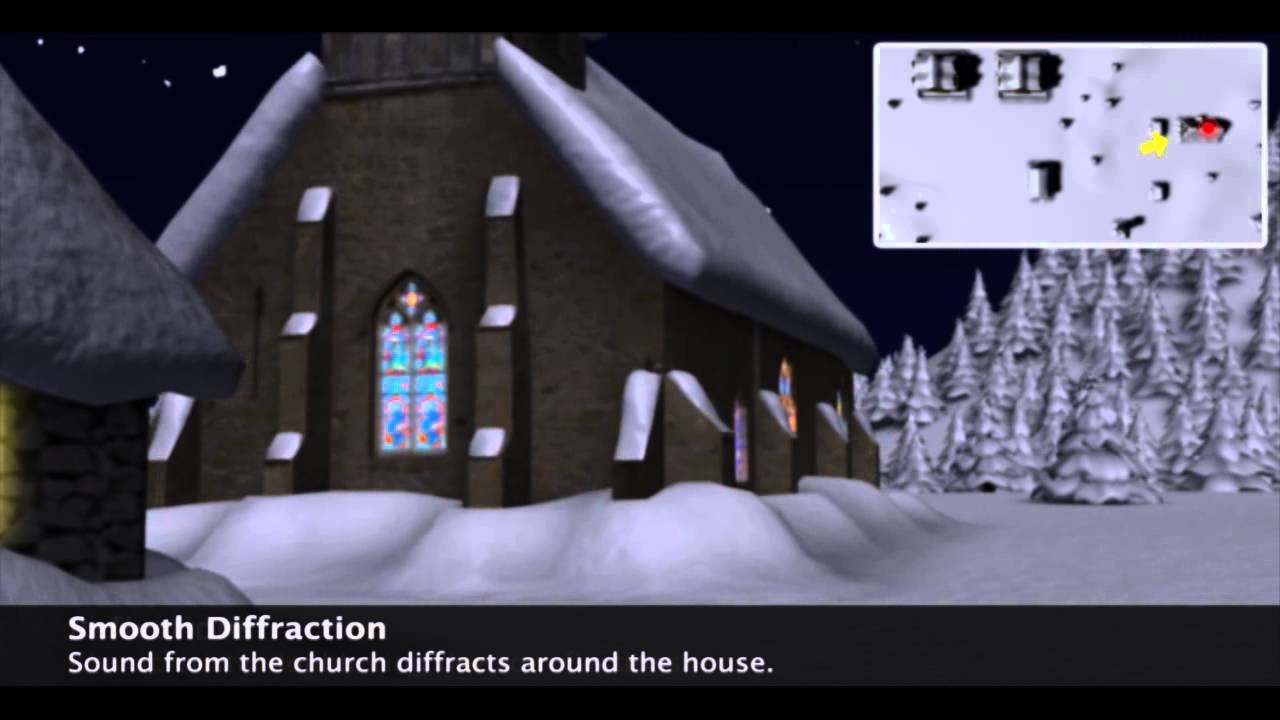 We present a novel approach for wave-based sound propagation suitable for large, open spaces spanning hundreds of meters, with a small memory footprint. The scene is decomposed into disjoint rigid objects. The free-field acoustic…
See more > 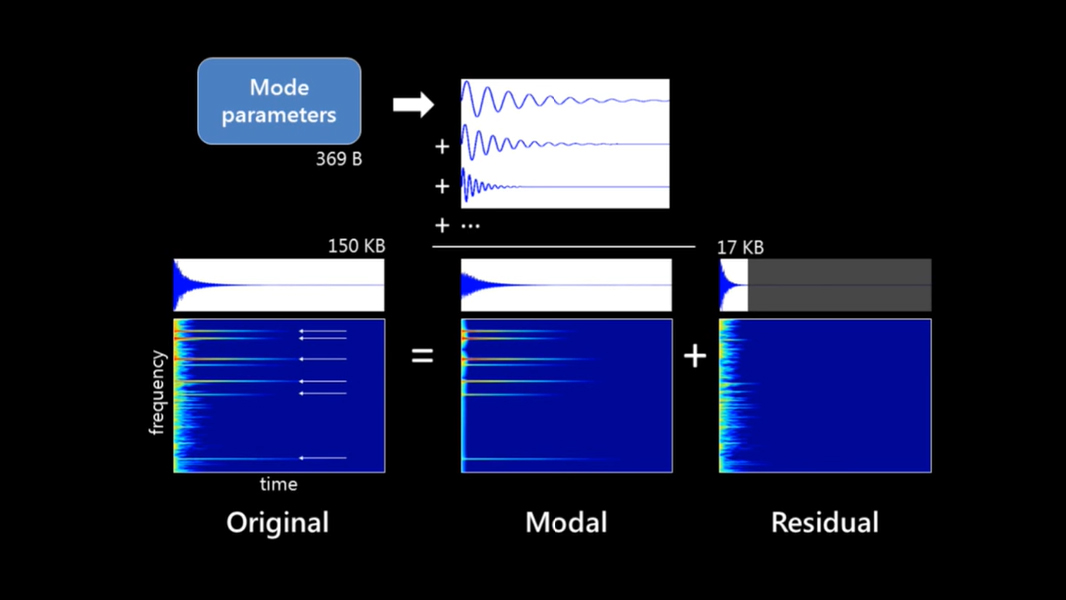 We present an interactive system for synthesizing high quality, physically based audio on current video game consoles. From a recorded impact sound, we compute a modal model, which we use to synthesize variations of the sound…
See more > 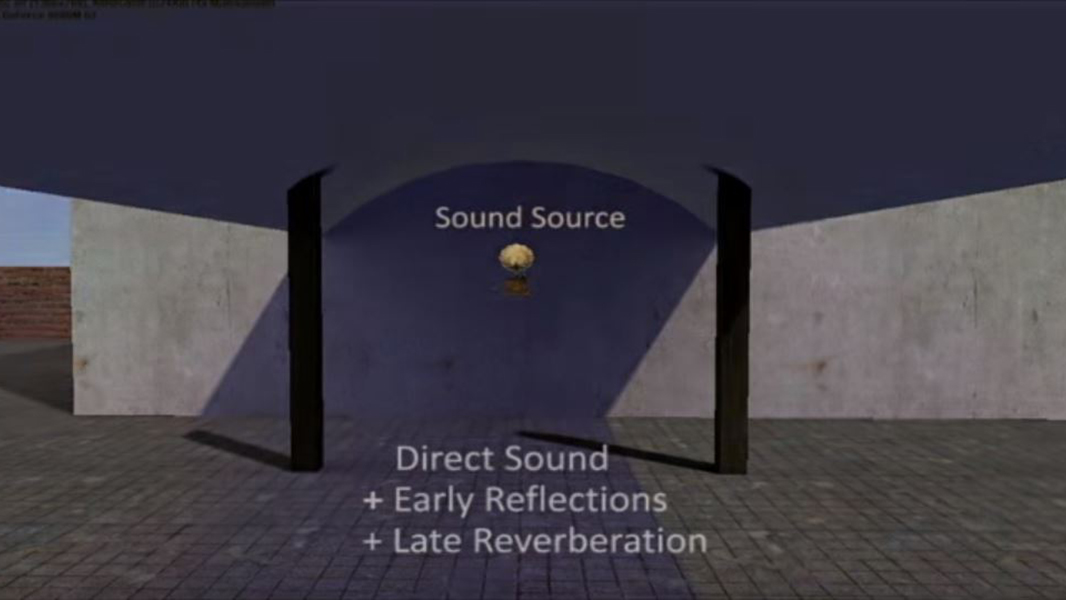 We present a method for real-time sound propagation that captures all wave effects, including diffraction and reverberation, for multiple moving sources and a moving listener in a complex, static 3D scene…
See more > 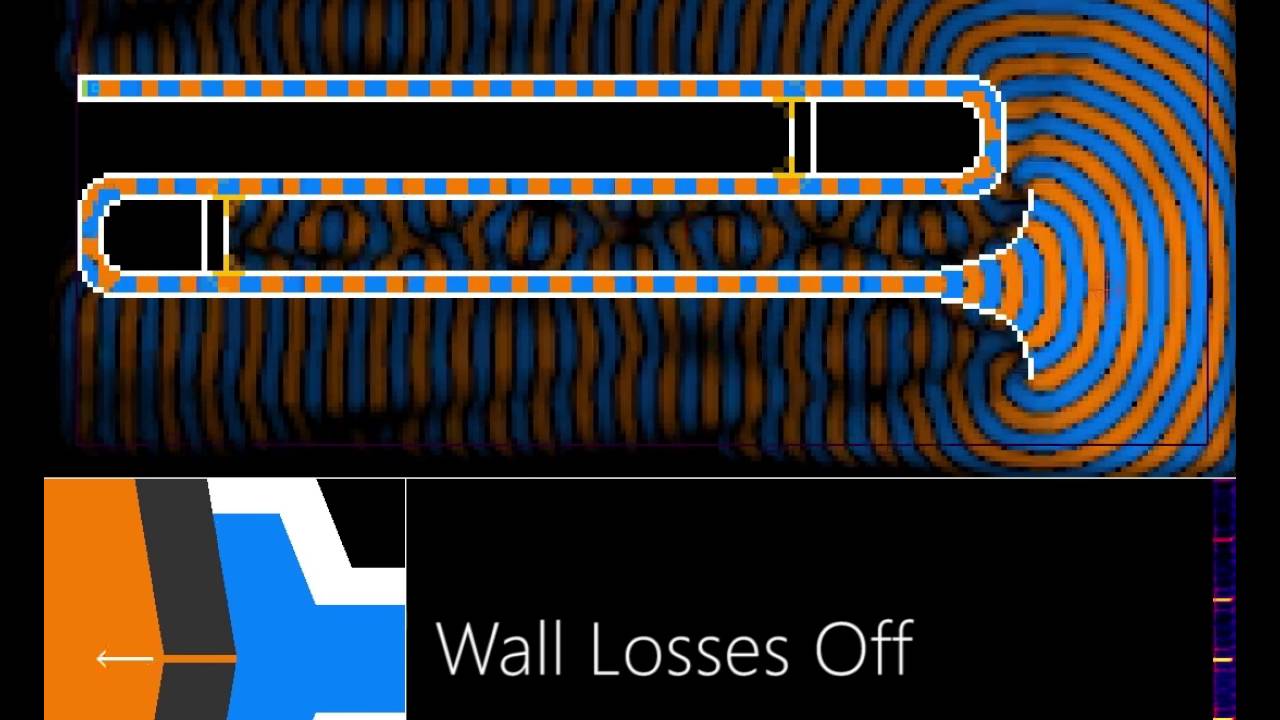