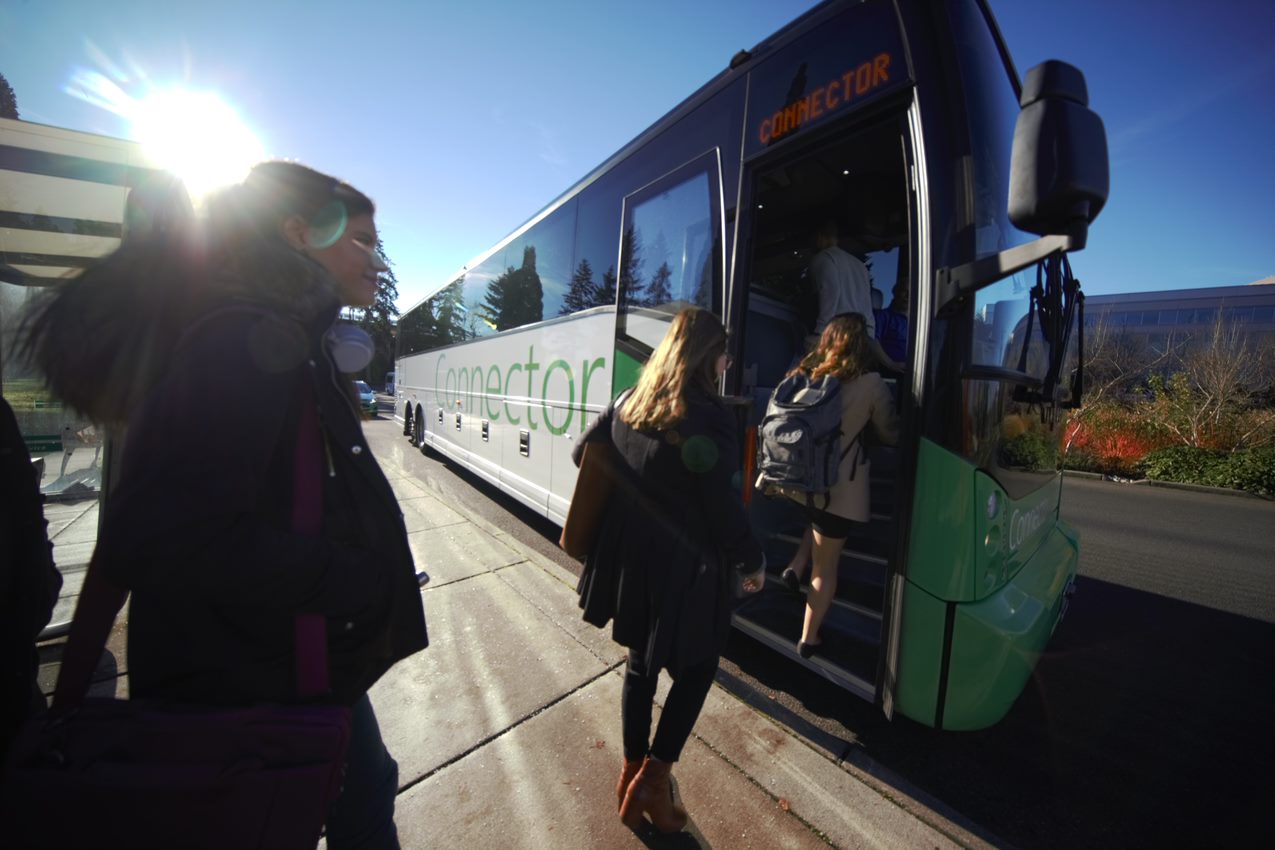 The goal at Microsoft is ambitious—to get most company employees to stop driving to work by themselves.

“Our vision is that by 2023, fewer than one in two employees travelling to Microsoft will drive alone,” says Elisabeth Kaczmarek, a senior logistics manager for Microsoft Real Estate and Security (RE&S). “We want to make it easier for our employees to get to and from work and to reduce our carbon footprint.”

Clearing the 50 percent mark is not a small task. “This is quite challenging for us because roughly half our employees live within a five-mile radius of our campus, and because our headquarters is in a suburban location,” Kaczmarek says.

To get there, the company is retooling how it approaches commuting, she says.

How do you do that?

By bringing together the wide-ranging group of commuting tools that used to be scattered across the company into one employee-focused tool called MERGE (Manage Explore Reserve Go Everywhere). Kaczmarek’s organization is working on MERGE with Microsoft Digital and Microsoft Artificial Intelligence and Research.

The list of transit experiences being blended into MERGE over the next six months is long. Many of services are available to Microsoft vendors that commute to and from company buildings.

MERGE includes the Microsoft Connector, a by-reservation network of buses that fans out into the region to pick up employees near their homes at set times and brings them to and from work in areas where Microsoft employee commute routes are underserved by public transportation. MERGE will soon tie into the regional bus and van pool network, showing departure and arrival times from at least three different metro bus agencies. It will connect to light rail once the under-construction light rail station opens next to the company’s Redmond campus. There is a matrixed carpool system being added that allows employees to find and carpool with fellow employees who live near them. There is even a bike shuttle that brings bike commuters from Seattle to Redmond and back that’s being worked into the app.

Not to be overlooked, MERGE also will soon fully incorporate the company’s large on-campus shuttle network, which moves employees back and forth between about 15 million square feet of Microsoft office and amenities in the Puget Sound area, including two campus-area transit centers.

A lot of activity is being funneled into MERGE. “We’re moving about 7,500 people per day,” Kaczmarek says. “We have one of the largest and most complex private fleet operations in the country, with only Disneyworld beating us in its complexity.”

All your RSVPs in one spot

Currently on MERGE you can RSVP for a Connector trip to and from home and a shuttle ride from one Microsoft building to another, says Regena Knight, a senior program manager in Microsoft Digital working on MERGE’s user experience. The plan is to fold in all the other experiences over the next six months (or when the service comes online).

“Our goal is for you to have a one-stop shop to figure out everything you need to know when it comes to transportation,” Knight says. “For example, if you’re a new hire, we want to have one place for you to get all of your information, including getting an Orca card (the regional transit payment system), how to sign up for a Connector, or to see a shuttle schedule between your building and one of our transit centers.”

The way the team plans for MERGE to work is to have it help you book a trip, no matter the specific transit system you need to where you’re going—if you’re going to the airport, for example, it should get you a shuttle to a transit center, a bus to a light rail station, and a light rail ticket to the airport.

Additionally, the goal is to make the experience device agnostic—it should work no matter where you are, what device your using to access the MERGE experience.

“We’re not there yet, but we are working on it,” Knight says.

Her team in Microsoft Digital, the company’s IT group, is working in partnership with the company’s research group to bring one of those in-app transit experiences to life, in this case in Outlook.

Microsoft Digital and the company’s Real Estate and Security group are also working with the research group on other projects, including one that uses real time data to get Uber-like route optimization for the company’s fleet of shuttles.

“We want our employees to be able to see where their shuttle is in real time,” Knight says. “We want them to be able to track it on their phone, so they know exactly when it’s going to arrive. Being able to see more accurately shuttle that’s going to pick you up is going make you feel more confident about using transit.”

The three teams are also working on a project where they will use sensors placed on shuttles to collect the kind of wear and tear data that will allow them to predict when a shuttle will breakdown before something actually goes wrong. “It’s much better for everyone involved if we can get ahead of problems before they happen,” she says.

The list of additional improvements Microsoft is looking to make goes on—the bigger point is to make the MERGE platform be the place where it all happens. “We really want it to be where everything comes together,” Knight says.

“We’re looking to commercialize some of the solutions that we’re building,” Choudary says. “The automakers that we partner with are very interested in the work we’re doing. So are companies with large fleets of vehicles, like hospitals, senior living centers, and even public services like metropolitan transit districts.”

Kaczmarek agrees, adding that pushing the envelope on how the company thinks about getting its employees to stop driving alone to and from work, and on improving how they move from building to building on campus, will help the company do the same kinds of things for the larger world.

“Getting transportation right is super valuable to our overall ecosystem, but even more so for humanity at large,” she says. “We’re super excited to see where we can go with this.” Opening the door to a new first impression at Microsoft

You learn a lot about someone when you pass through their front door. Microsoft is no different. The company is retooling the experience visitors have when they walk into Microsoft’s many front doors—the company has more than 770 buildings around the world, including more than 100 at its headquarters in Redmond, Washington. “Each building has... Read more A smart building complex that had its grand opening today at Microsoft showcases the company’s new Azure Digital Twins service. Microsoft has been aggressively building, deploying, and testing smart building technology on its own buildings for years. It has been progressively getting better and better at using sensors and Internet of Things (IoT) technology to... Read more