Said Asta Roseway, fusionist at Microsoft Research and one of the mentors to the high school interns, “We put the students into a maker lab, and gave them a project: build a robot with three different personalities that would socially engage with people. Based on that framework, they went to work and integrated mechanical engineering, coding, UX design, and robotics to create Stanley, a furry, one-eyed, Roomba-based robot.”

Another Microsoft Research project team worked on creating a machine teaching app where an individual could label and categorize social media posts to train an AI system on the go. Jina Suh, principal research software developer in the Computer-Human Interactive Learning group, managed the two young women working on this project. Said Jina, “We wanted them to learn about collaboration and working across silos. And they were amazing — they were operating at the level of college students.”

All the interns had backgrounds in robotics and coding, and were selected for their interest in prototyping and “making” culture. Said Asta about the interns, “From what I observed, they are super bright and passionate. They also want autonomy. So the trick was to provide them with enough guidance so they knew what to work on, but not so much that they felt micromanaged. They are fearless and want to jump in with both feet; our goal was to give them a safe place to land.”

The interns grew in confidence, learned a bit about how Microsoft works, and gained real experience prototyping. Microsoft got exposed to great future talent and furthered its goal to expand the tech diversity pipeline.

Intern-designed and built Stanley the one-eyed robot can sing Happy Birthday, provide you with the latest news, and take selfies.

Stanley the robot has three personalities: an extrovert that likes to take selfies, an annoying persona that sings Happy Birthday even if it’s not your birthday, and one that’s all about current events and news. To create this bot, they had to integrate Bluetooth, a navigation API, a mobile app, several microcontrollers, Visual Studio, social modeling and storyboarding. Their goal was to build this robot, then observe which of its personalities were most engaging.

“This was a faceted experience, because the future is cross-disciplinary — the girls needed to learn both different skills and how to communicate with specialists, such as engineers, social scientists, coders and more. This project gave them a window into a future where disciplinary silos are thinning,” said Asta.

Said Paul Johns, an engineer at Microsoft Research and one of the technical mentors on this project, “Part of what we like to do is approach problems through a different lens and ask new questions. Stanley came about because we asked, what if a bot had a personality in addition to its functionality? Would that be helpful, or just annoying? The interns helped us answer that question: it’s both!”

Mobile app for machine teaching on the go

In another intern-based project, the interns built a mobile app. Teaching for machine learning requires humans to put what they know into a computer, often a time-consuming task. But what if a mobile app could help that human who is teaching, do it in small bites, while waiting in line at the grocery store or while taking a break from another activity? That was the idea around the mobile machine teaching app.

To create this, the interns had to write a mobile app using a cross-platform technology called React. They did the wireframing, design and all the front-end implementation, while the technology mentors worked on the back-end, machine-learning side. The students learned how to integrate the Internet of Things, email notifications and Facebook notifications, and picked up skills in paper prototyping, the Sprint process and collaborating on code development.

Said Jina, “We wanted to teach them how an idea goes from ideation to a prototype via a user-centered design process. They have learned both confidence and skills.” While the interns picked up many skills, Microsoft got to support its long-term goal of creating a fuller pipeline of women to enter the technology research field. 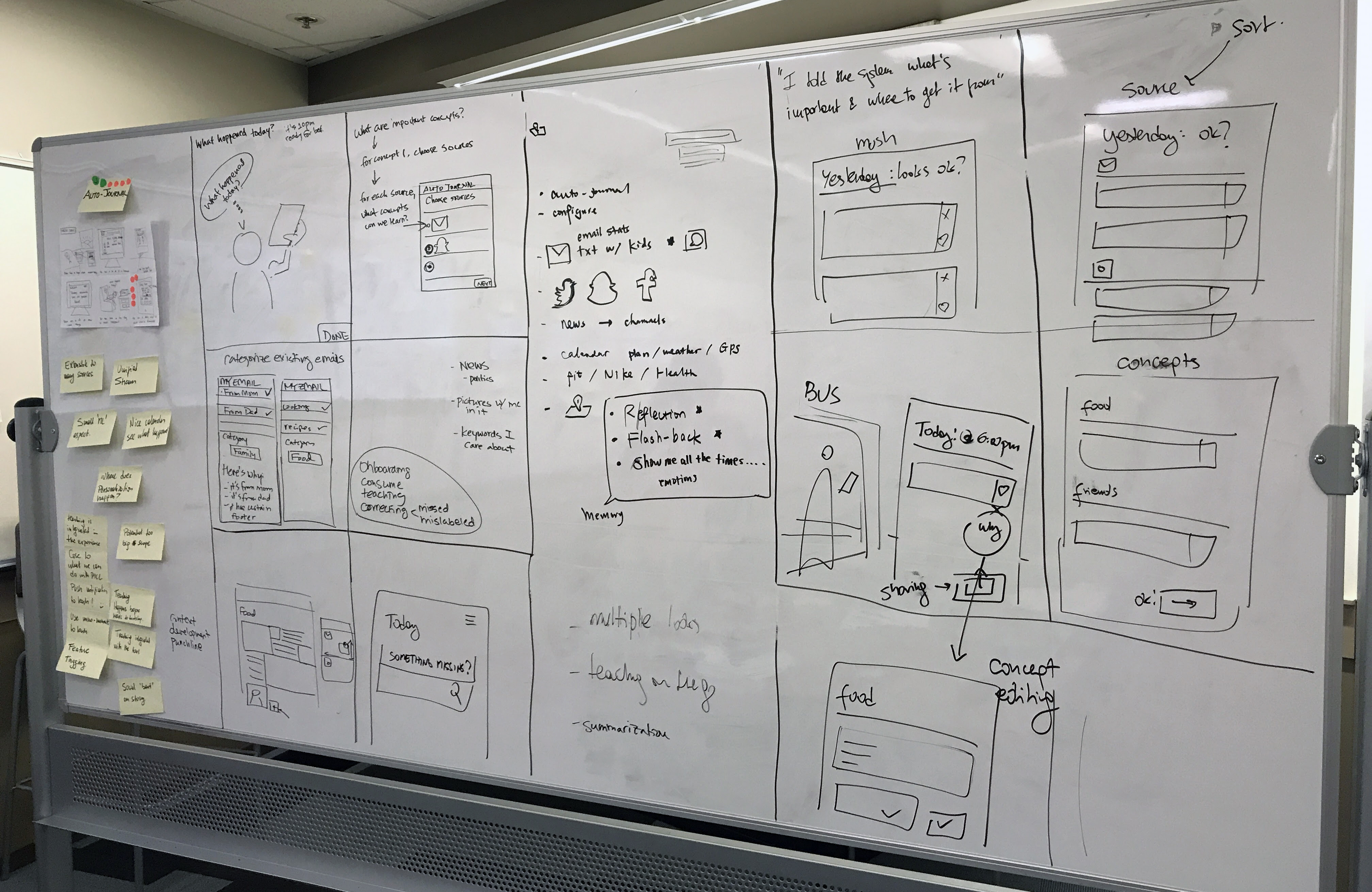 Wireframing of an intern-designed, machine-teaching mobile app that lets a user quickly label and correct a machine learning system.

Who learned more: Microsoft Research or the interns?

Many of these high school interns demonstrated a different brain frame than the Microsoft researchers: from growing up with technology, they have an intuitive feeling about technology and how it can be integrated in people’s lives. Microsoft Research learned from the interns some new approaches to thinking about social engagement and robotics. The interns learned about real-world challenges in prototyping, confidence in their ideas and how to troubleshoot.

Said Asta: “It makes sense to invest in the next generation, and expose students to the world of technology, and the earlier the better.”

High School Interns working on these projects were: