Microsoft is on a quest for AI at Scale with high ambition to enable the next generation of AI experiences. The Microsoft Translator ZCode team is working together with Microsoft Project Turing and Microsoft Research Asia to advance language and multilingual support at the core of this initiative. We continue to push frontiers with Multilingual models to support various language scenarios across Microsoft. Last summer, we announced our large scale Multi-Lingual Mixture of Expert model with DeepSpeed that can outperform individual large scale bi-lingual models. Recently, the latest Turing universal language representation model (T-ULRv5), a Microsoft-created model is once again the state of the art and at the top of the Google XTREME public leaderboard at that time. More recently, Microsoft announced the largest Megatron-Turing NLG 530B parameters model.

The annual Conference on Machine Translation (aka WMT 2021) concluded last week in beautiful Punta Cana, Dominican Republic. WMT brings together researchers from across the entire Machine Translation field, both industry and academia, to participate in a series of shared tasks, each defining a benchmark in an important area of machine translation to push the field into new frontiers.

The Microsoft Translator ZCode team, working together with Turing team and Microsoft Research Asia, competed in the “Large-scale Multilingual Translation” track, which consisted of a Full Task of translating between all 10,000 directions across 101 languages, and two Small tasks: One focused on 5 central and southern European languages, and one on 5 south-east Asian languages. The Microsoft ZCode-DeltaLM model won all three tasks by huge margins, including an incredible 10+ point gain over the M2M100 model in the large task evaluated on a massive 10,000 language pairs. (Findings of the WMT 2021 Shared Task on Large-Scale Multilingual Machine Translation, Wenzek et al, WMT 2021).

Figure 1: Official Results (BLEU scores) on the Full-Task and the Small-Task1 at the WMT 2021 Large Scale Multilingual Translation shared task

In this blog post, let’s take a look under the hood at the winning Microsoft ZCode-DeltaLM model. Our starting point was DeltaLM (DeltaLM: Encoder-Decoder Pre-training for Language Generation and Translation by Augmenting Pretrained Multilingual Encoders), the latest in the increasingly powerful series of massively multilingual pretrained language models from Microsoft. 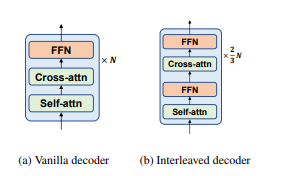 We apply progressive learning, first training a model with 24 encoder layers and 12 decoder layers, then continue training with 12 added encoder layers, resulting in a deep 36 layer encoder. To cover all language pairs, we generate dual-pseudo-parallel data where both sides of the parallel data are synthetic, translated by the model from English. We also apply iterative back-translation to generate synthetic data. We apply curriculum learning, starting with the entire noisy training data, then reducing it to a clean subset. We re-weight the translation objective to favor parallel data over the back-translation and dual-pseudo-parallel data. We apply temperature sampling to balance across language pairs. For each language pair, we choose, based on the dev set, whether to prefer direct translation or pivot translation through English.

Putting it all together, we knew we had an amazing massively multilingual system, but the official results on the blind test set exceeded our expectations. We scored 2.5 to 9 BLEU ahead of the next competitor, and 10 to 21 BLEU points ahead of the baseline M2M-175 model. On the dev test we compared against the larger M2M-615 model, which we also beat by 10 to 18 points. 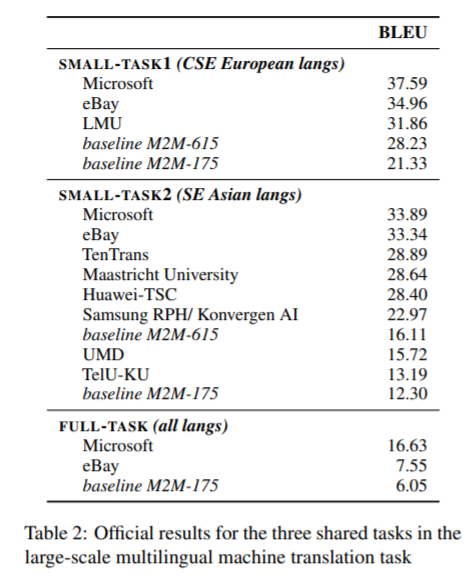 While we are excited about the big win at WMT 2021, what’s even more exciting is that unlike the other competitors, our ZCode-DeltaLM model is not just a translation model, but rather a general pretrained encoder-decoder language model, usable for all kinds of generation tasks beyond translation. This really enable our models to perform quite well on various multilingual natural language generation tasks.

We reached a new SOTA in many popular generation tasks from GEM Benchmark, including Wikilingua (summarization), Text simplification (WikiAuto), and structure-to-text (WebNLG). The DeltaLM-ZCode model widely outperform much larger models such as mT5 XL (3.7B) which is also trained on much larger data as well. This demonstrated the efficiency and versatility of the models leading to strong performance across many tasks.

Figure 2. Performance (RL scores) of ZCode-DeltaLM on the Summarization and Text Simplification tasks in the GEM benchmark

Multilingual Machine Translation has reached a point where it performs very well, exceeding bilingual systems, on both low and high resource languages. Mixture of Experts (MoE) models have been shown to be a very good fit to scale up such models as has been shown in GShard. We explore how to efficiently scale such models with Mixture of Experts: Scalable and Efficient MoE Training for Multitask Multilingual Models. MoE models with massive multilingual data and unsupervised multitask training present unprecedent opportunity for such models to provide truly universal systems that can further enable the Microsoft Translator team to eliminate language barriers across the world, as well as support a variety of natural language generation tasks.

We would like to acknowledge and thank Francisco Guzman & his team who collected the massively multilingual FLORES test set and organized this WMT track with such large scale evaluation.